How can teachers prepare to give a talk at a conference? #ELTchat Summary 06/11/2013

How can teachers prepare to give a talk at a conference? #ELTchat Summary 06/11/2013

How can teachers prepare to give a talk at a conference? 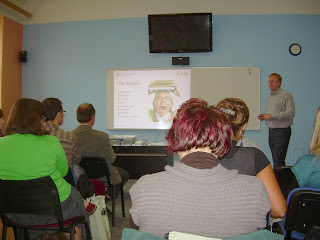 It’s 10 pm and I’m impatiently waiting for another #eltchat. What’s the topic tonight? Did my choice win this time? With my fingers on the keyboard, I’m waiting for the sound of the starting pistol. Here comes Shaun Wilden and announces the topic of the 6/11 evening
#eltchat – How can teachers prepare to give a talk at a conference? Not my top choice but I’ll adjust. Paul Gallantry is still deciding whether to use iPad or PC for this chat, because they are not equally responsive. Naomi Epstein is having serious problems with her Internet connection, for which she apologizes in advance.

Sue Annan and I have never given a talk at a conference, so we’re both willing to learn what we can. Marisa Constantinides mentions that Paul is getting ready for a talk so she’s happy to have some experienced speakers in our crowd this evening. James Taylor is just starting to present, so he’s looking forward to hearing some advice from the more experienced participants. I’ve personally seen James present at the #RSCON conference and I believe he will have a lot to say about presenting.

Here comes Paul with his first piece of advice: the first thing to consider is the focus of what you want to talk about – what do you really want to say? Sue Lyon-Jones adds that it’s important that you talk about what you know, what you believe in, and what you feel passionate about. She finds this crucial, along with planning and preparation. Shaun argues that you should make sure you’re clear on what you want to say and you shouldn’t try and say too much.

Paul believes that it’s good to break down the preps into parts. He thinks a good presenter needs 1. focus 2. simplicity 3. clarity 4. empathy. While Marisa and Paul maintain that the key to success is rehearsal, Shaun isn’t keen on rehearsing too much because it makes the whole thing too scripted. However, he admits that when he first started, he did rehearse. While Paul believes that you should always prepare your presentation with plenty of time to spare, Marisa later reveals that she often changes minutes before a talk, especially if she’s seen something relevant.

Now I’d like to know whether it helps to team up with somebody when presenting. Paul tells me that it can. He says he did a presentation with a colleague and it worked very well because they brought different strengths to the presentation. Shaun, on the other hand, finds it more difficult but he enjoys it.

Sue Lyon-Jones and I both believe that the key to success is to involve the audience. Sue elaborates on this a bit when she says that one should also research their audience. Rachel Appleby agrees saying: the more you know them, the better. As far as audience is concerned, Micaela Carey considers the ones who connect with their audience to be the best presenters.

Another principle that the participants decide to discuss, and which Shaun already touched on at the beginning, is the principle of ‘less is more’, i.e. using just a few words and visuals, and as few slides as possible. Paul argues that the presentation should be simple: ‘Don’t stuff it with too many ideas, and give space to delegates to discuss, cogitate and reflect’, he writes. Marisa retweets Csilla Jaray-Benn’s tips for basic slides rules, such as no smaller font than 24, and one slide = one idea. Csilla doesn’t like the fact that some presenters look at their slides, not the audience. Paul agrees with her encouraging presenters to have the confidence to look their audience in the face and suggests that one should not rely on the slides too much. James adds a little humour saying: ‘If I catch any of you reading from your slides, I’ll slap you with a wet fish’. 🙂 Shaun then introduces the concept of  ‘shockers’. To cut it short, shockers and unexpected situations just happen and they are there to make us stronger, to help us learn from our mistakes.

Another interesting idea is introduced by Paul, who believes that presenting to peers may be helpful but also daunting. However, this is where empathy is important – they are here to hear you and have chosen to.

I’ve always wondered if one feels safer when presenting at a webinar than with ‘real’ audience. So I ask the experts. Csilla, for example, argues that real audience is more supportive, but this may depend on presenter’s personality. Marisa is used to both face-to-face and webinars but prefers to be able to see the audience. Shaun replies to my tweet telling me that not being able to see the audience really throws you the first time because you can’t read any body language. Csilla concludes that one of the differences is that you have to be more precise when presenting online.

As a person with no experience in presenting, I want to find out about the secret tips (warm-ups, tongue twisters and various exercises) experienced presenters use before a conference. Marisa suggests breathing exercises. She says they’re good if one feels nervous. However, she admits she’s never tried them herself. She also suggests giving your talk to the wall, which is a good resonator. Csilla prefers practising in front of a mirror. A few participants are puzzled by Csilla’s remark that it helps to eat an apple before you start. She explains that it’s a stage technique used by actors, which helps you sound better.

Towards the end of the chat, Paul comes up with an interesting point that the time of the presentation is also important and adds that a post-lunch gig is always tricky. Sue Lyon-Jones reveals that she sometimes changes talks in response to the furniture, never mind the audience.

Finally, it’s again Sue Lyon-Jones who argues that watching talks by people in other fields (such as TED talks) also helps because good presentation skills are universal, which Sue Annan and Marisa confirm. Csilla then suggests Resonate and Slide:ology, excellent resource books for preparing presentations.

Marisa adds that there are lots of videos on YouTube on good presentation skills, such as on http://www.youtube.com/watch?v=wXILI9Q1jIw.James recommends one of the activities he did with his business students that taught him a lot about presenting http://www.theteacherjames.com/2013/02/teaching-charisma.html.

It’s past eleven and it’s time to say good night. It’s been an interesting chat and I’m happy I’ve got the opportunity to write my first #eltchat summary. I hope I haven’t misinterpreted someone’s ideas. If you feel I have, let me know and forgive me. Practice makes perfect and this is my first trial after all.

Summary contributed by Hana Tichá  and reposted here with her kind permission. Hana  is @HanaTicha on Twitter and her blog is How I see it Now An EFL teacher who loves teaching, learning, blogging, metaphors and thought-provoking discussions on ELT topics, education and (applied) linguistics.

The photo was taken by Hana. Click on the participants’ names to follow them on Twitter and remember to join us every Wednesday at 12:00 p.m.GMT+2 and 21:00 p.m. GMT+2