This summary was contributed by #ELTchat moderator James Taylor. You can follow James on Twitter at @theteacherjames and read his blog here.

On Saturday 5th of April at the IATEFL conference in Harrogate, Sugata Mitra delivered a plenary session that proved to be acclaimed and vilified at the same time. I was in the room at the time, and witnessed a large proportion of the room rise to their feet at the climax of his talk. After the hubbub had died down, discussion immediately began and dissenting voices began to appear. The debate hasn’t stopped yet and it continues on Facebook, Twitter, blogs, and on Wednesday 9th of April, on #ELTchat.

In this look at what has become one of the most contentious issues in our field for a long time, I will first summarise what was discussed in the #ELTchat, before looking at some of the other issues have been brought up by bloggers in the aftermath his talk.

According to Wikipedia “His work demonstrated that groups of children, irrespectively of who or where they are, can learn to use computers and the Internet on their own with public computers in open spaces such as roads and playgrounds, even without knowing English.” Many people have their doubts about his claims, including me, I feel I should point out before you read on!

If you haven’t seen it already, I recommend you watch Mitra’s plenary here, and watch his follow up interview here before you go on. You could also read Graham Stanley’s excellent summary of his talk and Lizzie Pinard’s too, written during the talk.

A sense of the size of the backlash can be detected in this tweet by @LeaSobocan:

There was a sense that a lot of what was being said by Mitra was not that revolutionary:

Some people questioned whether it was feasible to expect students to learn without a teacher present:

But some suggested that he was onto something:

The role of the teacher now as presented by Mitra…

And in the future…

And the kind of learning that took place:

And a word of warning…

Perhaps what was most surprising about this chat was how it didn’t reflect the polarised opinions that his talk created in the online ELT community. While there were disagreements, thankfully it stayed very polite and collaborative, which is to #ELTchat’s credit I think! But as someone who is, as I mentioned, very sceptical about what Mitra is claiming and fearful of the result of its possible implementation, I was surprised at the lack of support his ideas had during the chat. I expected stronger advocates to be present, arguing his case, but it felt like nearly everyone had doubts about what he was claiming.

Of course, it’s entirely possible that that is just a reflection of the people who were present on the day and I’m sure there are people who would have argued more vociferously in his favour at a different time. But I think part of this is a result of the discussion that sprung up after the original plenary, and the numerous blog posts may just have placed some doubts in the minds of those who were originally persuaded by Mitra’s ideas. As many people have commented, he’s a brilliant and charismatic speaker, and it’s easy to be wowed the first time you hear him. I know I was. We mustn’t, however, let this get in the way of a deeper, critical analysis of his thesis and the bloggers listed at the bottom of this page managed to do exactly that.

And just like Lea Sobocan, at the end of the #ELTchat I felt there were more questions to answer, so I’ve been reading through as many articles and blog posts as I can in order to compile a list of questions which I think Mitra needs to address. If you’d like to read the 25 questions I compiled, click here to read them below this #ELTchat summary on my blog. 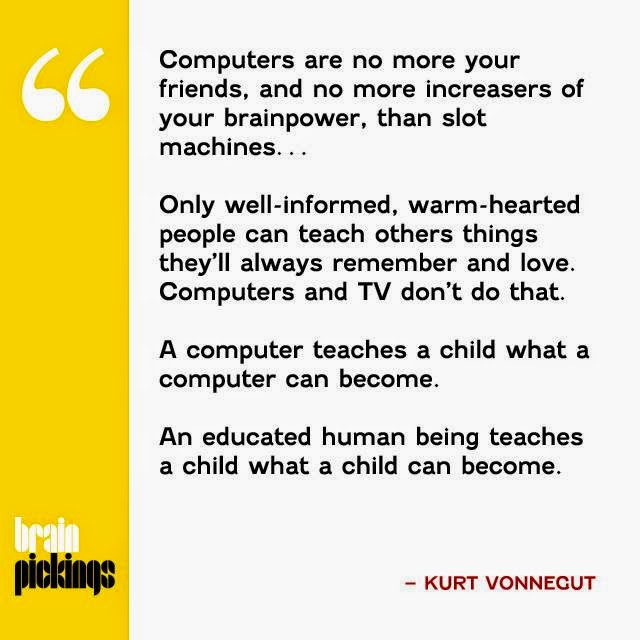 The wise words of Kurt Vonnegut

By The Way
Philip Kerr